“In fact, the entire education is self-education. The teacher is only a guide that shows you the way, and no school, or no matter how good it is, doesn’t give you education. What you get is something simillar to the lines of a coloring book. You yourself have to put the right colors.” (Louis L’Amour)

The social and educational center “Popasul Iubirii Milostive”, hosted on Thursday, September 29th 2016, through the initiative of the director, priest Petru Munteanu, an event organized by the Foundation Together for Social Solidarity from Piatra Neamt, the parish “Sf. Voievozi” from Săvineşti, Neamt County and the Humanitarian Association “Ursula Honeck” from Piatra Neamt, namely “Festivalul Ghiozdanelor”.

The beneficiaries of the humanitarian and educational action “The schoolbags festival” were 47 children, students at the Gymnasium School “I. Gervescu ” from Săvineşti.

The kids got new school bags and games, that were distributed by Ms. Augusta Jumanca. 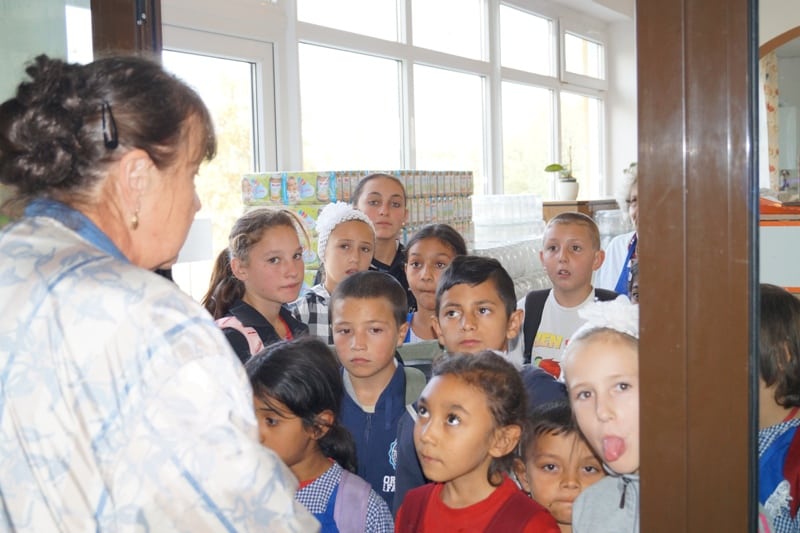 After a brief introduction regarding the implementation of the action, Ms. Jumanca invited the children to say a prayer for all those who made the event possible, for people who helped raise the goods that they were about to receive.

The joy and curiosity on the faces of those waiting to receive gifts, and afterwards the contentment and delight was expressed loudly.

“Beside the schoolbag I received toys as well!”, said Lorena Ciobanu.

“Ooo! I really like the pencil box and I really needed the colours I found in it!”, said Mihăiţă Buhuşanu.

Mrs. Augusta Jumanca told us: “Even though the school year started a few days ago, we were able to give today backpacks to the children from Săvineşti. We are happy that we managed to bring a smile on the children’s faces this year, as well, and hopefully in the future we will be able to have the same results. We really want that the things found in the schoolbags will help thechildren who have received them.”

We believe that the event was a success and we look forward to the future edition of the “Schoolbags Festival”.

This website uses cookies so that we can provide you with the best user experience possible. Cookie information is stored in your browser and performs functions such as recognising you when you return to our website and helping our team to understand which sections of the website you find most interesting and useful.

Strictly Necessary Cookie should be enabled at all times so that we can save your preferences for cookie settings.